Today we have a guest post, courtesy of my son. I told him a story of seeing a tiny chicken coop set out between the curb and the sidewalk like a discarded couch (Seattle is full of residential chicken coops) and he wanted to write a post for my blog, which turned out to be a pastiche of his current favorite book: Hyperbole and a Half. Interestingly, he wrote it from “my” point of view. Here it is:

Yesterday, while walking to my local Starbucks, I passed a Large-ish (is that a word?) Box out on that grassy strip of space between the road and Sidewalk.

I stopped to take a closer look, as boxes sometimes have interesting contents. The Box was really a sort of Wooden frame, filled by chicken wire, and It contained chickens. One was kind of lying there, dragging itself across the cage back and forth, seemingly with no real goal. The other chicken, however, Looked like it was from a horror movie where aliens invade chicken’s brains before they realize chickens are kept in neat little cages. 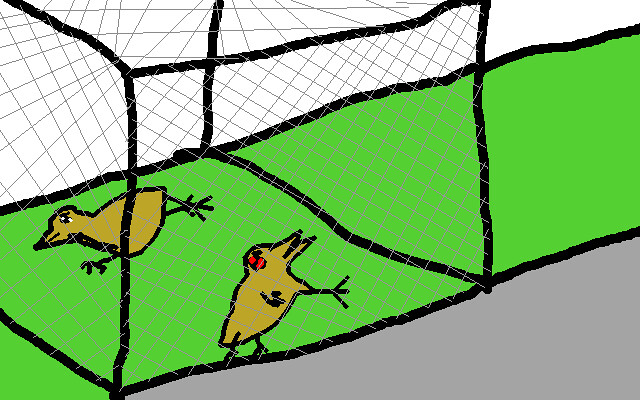 It repeatedly slammed itself at the walls of the cage.

The chicken didn’t seem to be attacking me in particular, but instead, the shape of the house. maybe this is why the chickens were abandoned out here in the savage sidewalk-roadlands.

I can almost imagine a sign that says “FREE POSSESSED CHICKENS!”

I may have to go back with some paper and a sharpie.

If you liked this post, please consider sharing it.

Mirrored from Twenty Palaces. You can comment here but not there.