Superheroes and their costumes (longish)

Is this really a good idea?

No, I don’t mean swinging high above the city from a thin strand that was liquid seconds before, and that you made yourself with a basement chemistry set. I mean the suit. Should Spider-man be wearing a suit with webs and spiders on it?

Hey, you’re thinking, it’s a theme. I get that. I get the theme, but as soon as you see a superpowered guy with a spiderweb on his clothes, don’t you immediately think “I’ll bet he has spider powers, like climbing walls and shooting webs.” The strength might be a surprise but come on, he’s wearing a costume. Better to assume he can throw a Prius at you until you prove he can’t.

And what about this guy:

Maybe if he shaved his mutton chops (and his shoulders) you might think “What’s this guy call himself, the Clydesdale?” But no, not with those bare feet and unclipped nails. 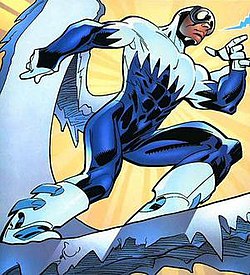 Just before they started using their powers. If you saw people in those costumes committing a bank robbery on Action News, what would you bring with you as you raced to the scene of the big fight? That’s right–a fire extinguisher for the first one and a flame thrower for the second.

Even worse, their names are Firestorm and Blizzard.

This is what we call Giving Too Much Away. When I get superpowers and start fighting crime, I’m going to get a black and white striped suit, with a mane down the back. People will see me and think “Zebra? I’ll bet he’s pretty fast and can kick hard.” Which is just when I’d breathe fire on their asses.

In fact, I’d have a bunch of different suits to wear, and some of them would be identical to what the other heroes in the city wear. High-tech jewel thieves wouldn’t know if they were facing Meson Ray, Knifey the Stabber, or Captain Breath… until it was too late!

Seriously. Let’s try to use our heads here.

Why am I thinking about this? Because of one of the toughest edits to Man Bites World. The POV is, again, tight on Ray, and he doesn’t have a lot of people explaining things to him. He certainly knows more than he did in book one, all hard-earned info, lemme tell you, but not everything.

And my agent (who is my only beta-reader, remember) gave me a note saying that I needed to define the main antagonist’s abilities. Is he incredibly powerful like the guy from book 2? More? Less? What can he do?

Of course she’s right. I need to establish the boundaries and set the context here. Except, this guy, who does not have a friend in the world, has no one to tell about his abilities. What’s more, he has no reason to talk about them. He has several conversations with Ray in the course of the book, and he knows Ray is thinking about killing him, so why would he want to show his hand?

Antagonist: Me? Oh, I can generate large pulses of electrical energy and discharge them through my hands or teeth.
Ray: (writes in notebook: “buy rubber galoshes”)

So the only way to reveal what the guy can do is to show it happening, and by then shit is already going down.

This is the most difficult note she gave me, and I’m not sure I solved it completely. The change I made was this:

Ray: Why would you even do that to yourself?
Antagonist: Trying to find out more about my powers, eh? Hah! Forget it! (snaps fingers in Ray’s face)
Ray: (rolls eyes)

Okay, the revisions weren’t literally like this, but that’s the gist. Will it work? Hell yeah! I kinda love it. Will it work for anyone else? Well, that’s sorta the question. I’ll explain things to my ever-wise agent and see what she says. But sometimes you have to respond to a note like “What was in the box?!?! You never said!” by scrolling down to the last line of the document and writing “And we never did find out what was in that box. THE END”.