In a few weeks, Black Gate #15, which includes my story “Eating Venom”, goes to press. Here’s the artwork that accompanies it (and since you’re online, you get to see it in color–it’ll be B&W in the magazine): 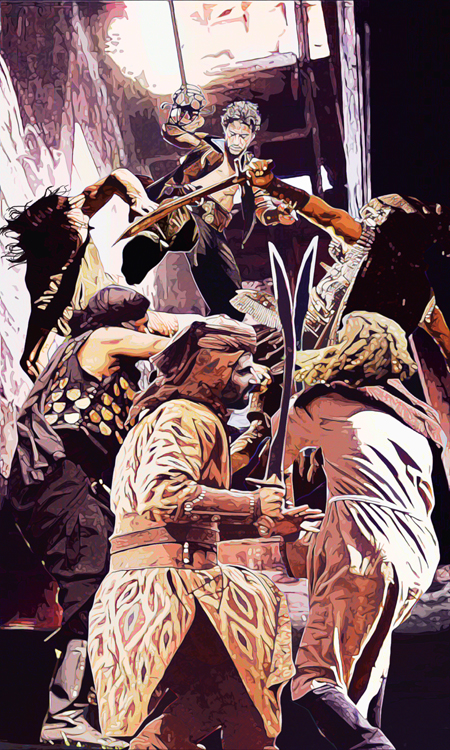 Cool, huh? It’s by Malcolm McClinton. I’d never have thought to imagine the characters that way which is why I’d be a terrible artist, but I love it! Click the link to see more of his work.

About that story: I sold it over three years ago, so it’s a bit of a time capsule of my writing style and technique. I’ll be interested to reread it when it comes out.

How it came about: Some folks will remember a few years back when Janine Cross’s Touched by Venom came out, there was an online row about the writing style, and the way the style was criticized in an offline gathering.

Some folks know that I don’t get story ideas easily or often–I’m just not that sort of writer. Still, I was sure there was something worthwhile there, and after a bit of work (and more than one false start) I came up with the idea of a sort of basilisk fugu and wrote “Eating Venom”.

It’s full of my usual obsessions: outright bastards, flagrant lies and manipulation, decent people trapped by honor and expectation, magical elements that are largely backgrounded for human conflicts, screwed-up social/political structures, bitter resentments, and much stabbing with sharp pieces of metal. I’m proud of it.

You guys are reading Black Gate magazine, aren’t you? It’s full of adventure-oriented fantasy of the kind I love.

Anyway, I’m off to have Xmas Eve lunch with my in-laws (and the holidays have me way behind on all my online reading). Best wishes to everyone reading this, whether you celebrate Christmas or not.