Now that each book gets its own dedicated post, I’m going to put this one to be your one-stop shop for Circle of Enemies info.

For starters, the book trailer is here.

The first chapter is available free.

The book earned a starred review from Publishers Weekly. (That makes me three for three so far.) 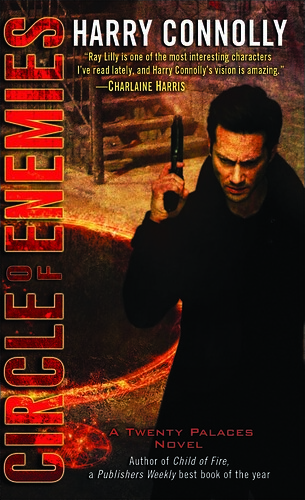 Trust me, it’s pretty. I just can’t get a decent scan Fixed. It’s a new design, and personally I really like it.

Here’s the plot description on the back cover.

Former car thief Ray Lilly is now the expendable grunt of a sorcerer responsible for destroying extradimensional predators summoned to our world by power-hungry magicians. Luckily, Ray has some magic of his own, and so far it’s kept him alive. But when a friend from his former gang calls him back to his old stomping grounds in Los Angeles, Ray may have to face a threat even he can’t handle. A mysterious spell is killing Ray’s former associates, and they blame him. Worse yet, the spell was cast by Wally King, the sorcerer who first dragged Ray into the brutal world of the Twenty Palace Society. Now Ray will have to choose between the ties of the past and the responsibilities of the present, as he and the Society face not only Wally King but a bizarre new predator.

What that doesn’t quite capture about the book is that this is the most personal and most emotionally-complicated book yet. It’s somewhat less violent than previous books, but the violence that’s there hurts more.

Now it’s time to do the blurbs:

“Ray Lilly is one of the most interesting characters I’ve read lately, and Harry Connolly’s vision is amazing.” — Charlaine Harris

If you want to buy a paper copy:

If you want to buy it in ebook form: