Let’s start by saying this was a Card Kingdom Giftmas. Between the three of us, we must have dropped almost $600 there for card and board games, plus the never-ending Pokemon purchases.[1] Curious what we got? Here’s a pic. 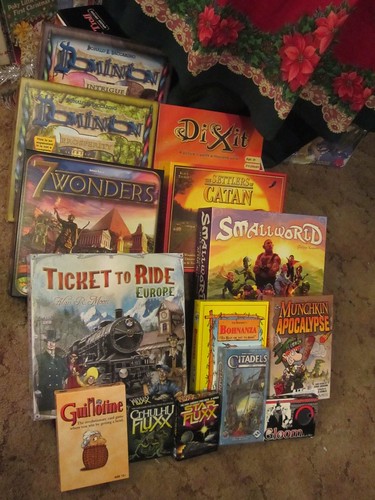 Except that’s not everything. We forgot to include HIVE, which is a two-player game best described as “nature chess” except with fewer pieces and no board. The other game we forgot is FRIDAY, a solo deck-building game about a Pacific Islander who finds himself saddled with a hapless European shipwrecked on the island. You have to teach him how to survive and defeat pirates (by building the deck) in order to rid yourself of him. [2]

Also, the pic does not include the Pokemon stuff we go, including an entire booster box which went over… well, see footnote 1.

We haven’t played all the games yet, but there isn’t a dud among them. Some of the new Dominion cards are brutal, Munchkin Apocalypse is just as funny as the base game, and Guillotine is a surprise favorite.

Dixit is great but will play better with four players. 7 Wonders promises to be great fun but we shouldn’t have tried to play it when we were so exhausted. And even though Gloom promises to be great fun, I would have never bought it if I’d known the cards smelled like perfume. It’s a sunny day today, maybe I’ll air them out outside.

We finally replaced our ailing 19″ CRT television with a 32″ flatscreen; that’s not as large as most families have, but to us it’s a huge treat. Naturally, the first thing we watched on the big screen was the entire Lord of the Rings trilogy (I received the extended editions last year)[3]

After that, we hooked up the Wii. My son got DJ Hero 2 and I got Lego LOTR. Yes, we’re hardcore gamers over here.

The two best-received gifts were (first) the Sensu iPad paint brush we bought for my wife. Theoretically, the art programs on her tablet should let her make art anywhere and anytime, but she hated using her finger because she couldn’t see the mark she was making. With the brush, that’s all changed. It will be a challenge for her to work on such a small surface, but that’s a challenge she’s willing to face.

The second gift was the laptop my son received for his birthday. He was born on Boxing Day, and we do our best to carefully separate the two celebrations. Anyway, his new computer is better than either of mine and he’s already pushing for Call of Duty or Skyrim for it.[4] In it’s way, this is also a gift for me, since he won’t have to do his schoolwork on my desktop all damn day.

So that’s why this blog has been dormant lately: holidays and birthday. Plus I’ve been working hard on EPIC SEQUEL WITH NO DULL PARTS. Sorry if I’m not around as much as I normally am but there’s work to do and fun to be had.

[1] Or is there an end? The boy is taking a break from Pokemon; he’s bored with his deck and bored with the game. As much as he likes the kids he plays against, it’s just not doing it for him the way it used to. We’ll see if he’s permanently moved on or if he just needs some time off.

[2] I’m convinced there’s another game that we left out, but for the life of me I can’t figure out what it would be.

[3] I’ve decided I prefer the extended editions. There’s more room for nuance in them. Boromir is not just this desperate, untrustworthy character, he’s also the hero who offers words of kindness to Frodo when their needed. And he has scenes with Aragorn, a ridiculous omission from the theatrical releases. However, I could have done without the avalanche of skulls bit and the orcs who use grapple attacks in the middle of a battle.

[4] As if his mom would let an 11yo sit in his room playing first person shooters. As if.